Happy The Elephant Is Not Legally A Person, New York Court Rules 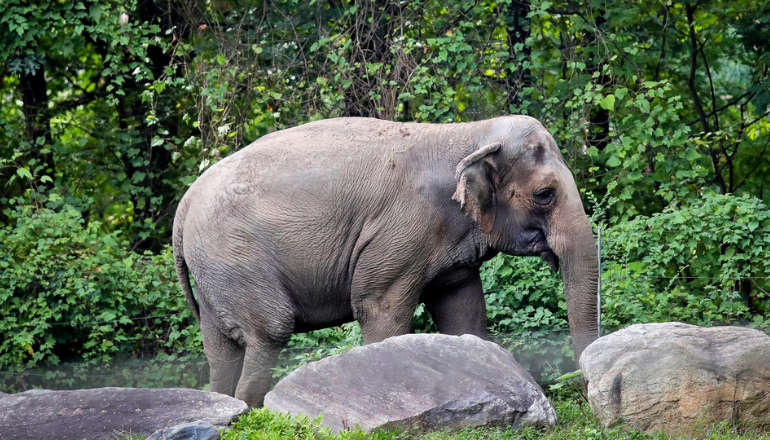 Happy has lived at the Bronx Zoo in New York for 45 years. Pic: AP/Sky News

She has four limbs, expressive eyes and likes to stroll through greenery in New York city - but Happy the elephant cannot be considered a person, a court has ruled.

She has lived at the Bronx Zoo in New York for 45 years.

Campaigners at the Nonhuman Rights Project argue that Happy was worthy of the right to be considered a person and is therefore being illegally confined at the zoo.

The zoo maintains that she is neither illegally imprisoned nor a person.

The question of whether basic human rights can be extended to an animal was put to New York's highest court, which ruled that Happy cannot be considered a person being illegally confined to the zoo.

Extending the right to Happy to challenge her confinement at a zoo "would have an enormous destabilising impact on modern society" and granting legal personhood would affect how humans interact with animals, according to the majority decision by the state's Court of Appeals.

The decision affirms a lower court ruling and means the elephant will not be released to a more spacious sanctuary.

"Indeed, followed to its logical conclusion, such a determination would call into question the very premises underlying pet ownership, the use of service animals, and the enlistment of animals in other forms of work."

Two of the seven appeals judges, Rowan Wilson and Jenny Rivera, wrote separate, sharply worded dissents saying the fact that Happy is an animal does not prevent her from having legal rights.

Ms Rivera wrote that Happy is being held in "an environment that is unnatural to her and that does not allow her to live her life".

"Her captivity is inherently unjust and inhumane. It is an affront to a civilised society, and every day she remains a captive - a spectacle for humans - we, too, are diminished."

The zoo and its supporters warned that a win for campaigners at the Nonhuman Rights Project could open the door to more legal actions on behalf of animals, including pets, farm animals and other species in zoos.