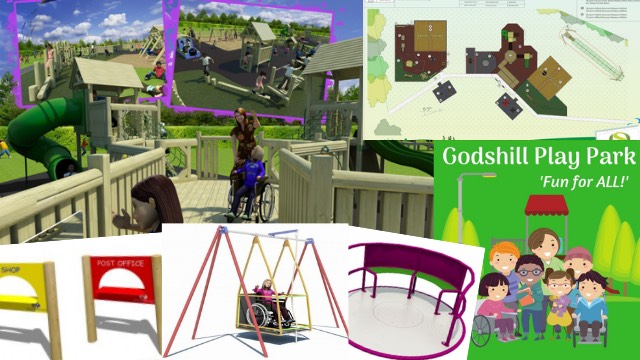 Organisers behind the Godshill Play Park project are reaching out to Islanders and Island businesses to sponsor a piece of equipment for the new inclusive park.

As previously reported by Isle of Wight Radio, plans for the play park located in Central Mead behind The Old Smithy, were given approval by the IW Planning Authority earlier this week.

Now organisers just need to raise the final £10,000 to get the project underway. Once funding has been secured, the project should take just 12 weeks to complete.

Nikki Collinson-Phenix, who has been working on the project for the last six years says the park will change the lives of Islanders with disabilities.

"We do not have an ability swing at all on the Isle of Wight, and yet we have so many children and young people that are in wheelchairs and there is no place for them to go and have a swing.

"I am reaching out to Island businesses for sponsorship of the play equipment which ranges from £350-£24,000. But I would love for an Island business to sponsor the wheelchair-accessible swing, which is £7,000 because it’s such a significant piece of equipment and the Island needs it."

The project has already received backing from businesses such as Isle of Wight Experience, Island Car Centre, The Entertainer, GKN, Vestas and has received a number of anonymous donations. But there is more play equipment that still needs sponsoring.

"I would love with all my heart for Islanders and Island businesses to reach into their pockets and say how can we make our contribution to this play park and sponsor a piece of equipment."

You can make a donation, or get in touch with the organisers behind the project via their Go Fund Me page: