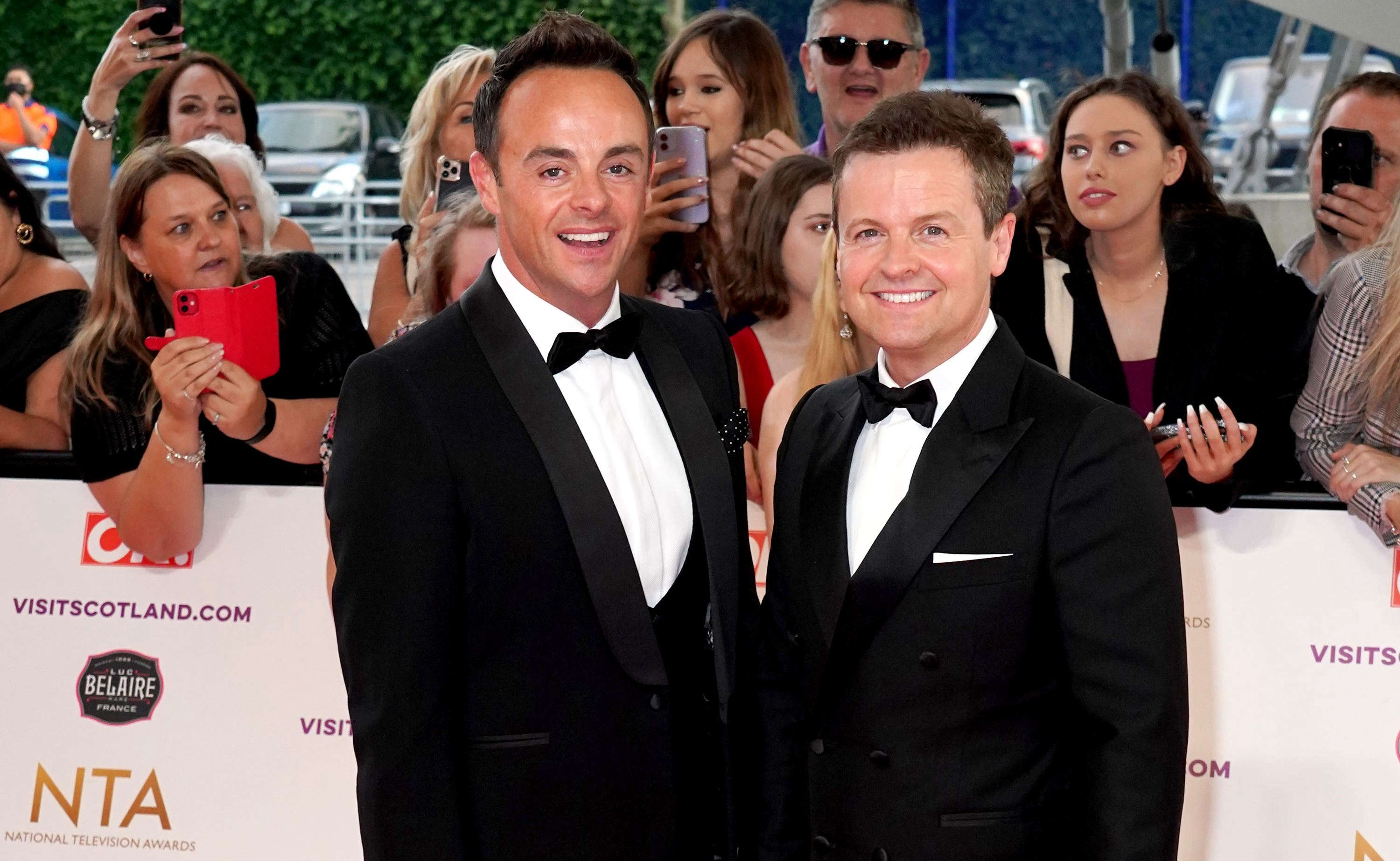 The duo thanked their fans and recalled their first victory two decades ago.

Ant McPartlin and Declan Donnelly have won the best TV presenter prize at the National Television Awards for a 20th consecutive time.

The presenting duo faced competition from Piers Morgan, who had set his sights on ending their domination at the event.

However, he did not attend and shared a photo on Twitter apparently showing him watching the ceremony on his TV at home.

Taking to the stage, McPartlin said: “We were talking in the car on the way here and the first year we won an NTA, Tony Blair was the prime minister and Newcastle United qualified for the Champions League. It just goes to show how long ago it was.

“But do you know what? This one means the most. Twenty years. This is really, really special. You have no idea how special this is.”

Donnelly added: “When you get to 20, you can’t help but stop and look back at the first time we won in 2001, and so much has changed in both our lives since then but one thing that hasn’t changed is how unbelievably grateful we are that you take time year after year to watch both of us.”

Morgan was nominated following a turbulent first half of 2021 which saw him depart Good Morning Britain over incendiary comments about the Duchess of Sussex.

He was also up against Bradley Walsh and This Morning stars Holly Willoughby and Alison Hammond.

Following the announcement, Morgan tweeted: “Wow! What a shock! Congrats to Ant & Dec. Thoroughly deserved 20th consecutive win – the way they held those jungle contestants to account during the pandemic was absolutely brilliant.”

The ceremony, which took place at London’s O2 Arena on Thursday night, saw It’s A Sin, After Life, I’m A Celebrity… Get Me Out Of Here!, and The Great British Bake Off scoop awards.

Host Joel Dommett started the show with a pre-recorded skit in which he searched at short notice for a nominee to open the event with a “big musical number”, eventually settling on Hrvy, who performed Runaway With It with his former partner on Strictly Come Dancing Janette Manrara.

“We are live here in a real room with real people,” he told the cheering audience.

The first award of the night, the Bruce Forsyth entertainment award, went to I’m A Celebrity… Get Me Out Of Here!

Co-host McPartlin said: “Thank you. It was a real change to do it in Wales last year but it was absolutely brilliant. We loved it, we loved doing it there and we can’t wait to do it again this year.”

The new drama prize went to It’s A Sin, with creator Russell T Davies dedicating the win to “those we lost, those who lived, those who learned and those we loved” during the Aids crisis.

After Life won the comedy award, beating shows such as Sex Education, The Vicar Of Dibley and Friday Night Dinner.

Creator Ricky Gervais jokingly said on stage: “I will keep it short. It’s already interminable. Thank you for Netflix for all their support and their total lack of interference. They are just the best broadcaster.”

Newly reunited boyband JLS delivered a medley of their songs including Beat Again, Everybody In Love and their new number Eternal Love against a backdrop of a starry night and dancers dressed in red.

The award for challenge show went to The Great British Bake Off, fending off competition from Celebrity SAS: Who Dares Wins and Love Island.

Peter Sawkins, an accounting and finance student from Edinburgh, was crowned the show’s youngest ever winner at 20 last year and he accepted the prize on stage wearing a kilt.

Kate Garraway won the award for authored documentary for Finding Derek, which offered candid insight into her family life while her husband, former political adviser Derek Draper, spent a year in hospital being treated for coronavirus.

Visibly emotional, she told the audience: “We want the joy back. We want it to be over. But if you are still living with the stars the fight goes on. But of course most of all, Derek, you should be here and (he) should have had the chance to tell his own story. Derek, you are going to get the chance. Believe. The hope is real.”